In my search for a fast switching method to fire up my experiments someone mentioned a spark-gap-switch on one of the forums. I went into an electronics store to ask if they sold them and was informed that I would need a special license to have one imported for me. When I replied that I would rather make my own I was warned that the FBI might start keeping track of what I do as the Trigatron is known for its use in detonating nuclear weapons. Well if that’s not what I’m going to use it for then I think it’s ok to make one because, after all, they do have other uses.
Do a search on “Trigatron” for a detailed description of its operation but for now the basic principle of the Trigatron is that you can switch very high voltages and currents without anything making contact. By having two contacts very close to each other, but far enough away to prevent arcing, waiting to switch a high voltage and current; all you have to do is use a third electrode to ionize the gap which enables the electricity to flow across the air-gap. The next image shows my first crude attempt at a basic Trigatron using a modified gear-reduction starter motor to hold the contacts where I wanted them. The spark-generating-coil provides my trigger spark and a 3300uf capacitor charged to 325 volts by an old flash is joined at either end of the contacts with a fuse in line that will blow if it conducts. This attempt failed probably because the gap was too large. 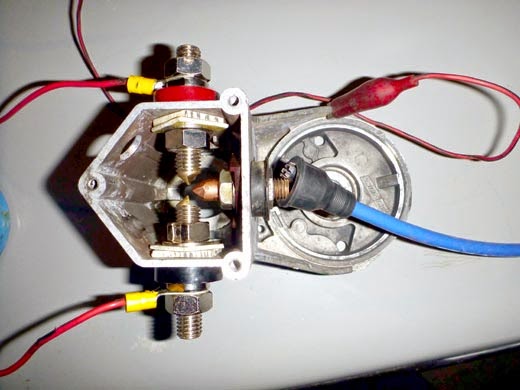 As can be seen from a close-up image my contacts are really large and rough, as is the trigger electrode, making it difficult to get them close enough for a 325 volt supply to jump the gap. 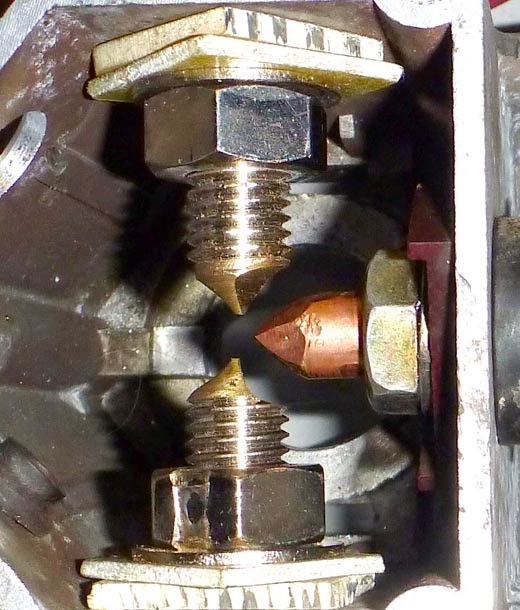 But I did eventually get it to work and the design shown below is what worked. The two red wires coming off the contacts were eventually connected to the large blue capacitor strapped upright to the flash. The blue line drawn in shows where the HT lead from the coil went. 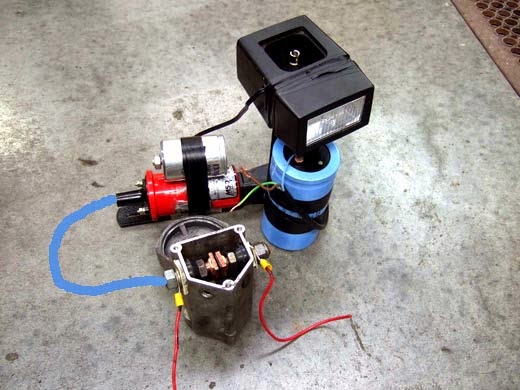 This is the more complicated design to make for a Trigatron. Instead of adding a third electrode from the side, which ionizes half the gap as it jumps across, almost the entire gap can be ionized by having the third electrode running down the centre of one of the main electrodes. This way when the spark jumps across to the other side it creates a path for the lower voltage supply to rush across as well. The professional way of doing this apparently involves drilling a 1mm hole down the centre of the electrode and having an extremely thin, insulated wire, as the trigger electrode in the centre of that hole.
My skills do not include finesse. I found a 5mm plastic tube with a metal rod running down the centre, which used to be connected to the central locking system of a car I had worked on. This would have to do. I drilled a 6mm hole and inserted my “trigger electrode”. 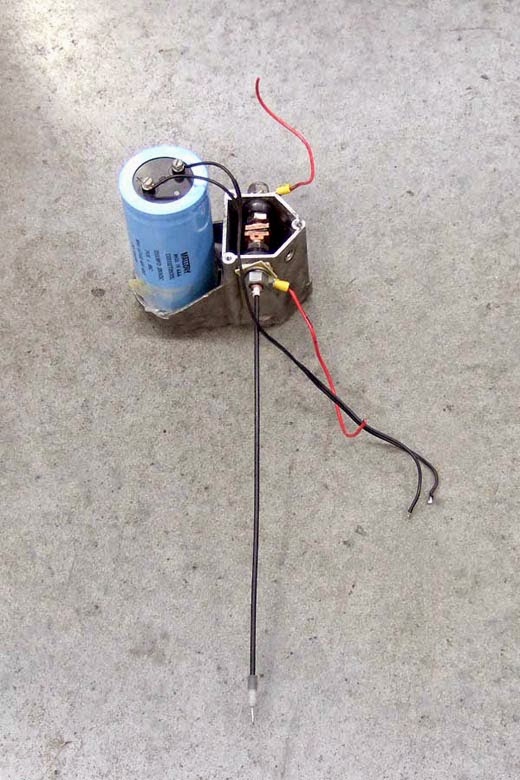 The normal solenoid contacts of the starter motor were then modified to be able to go extremely close together making the gap for the 325 volts to jump as small as possible without too much fireworks and guide-dog training. 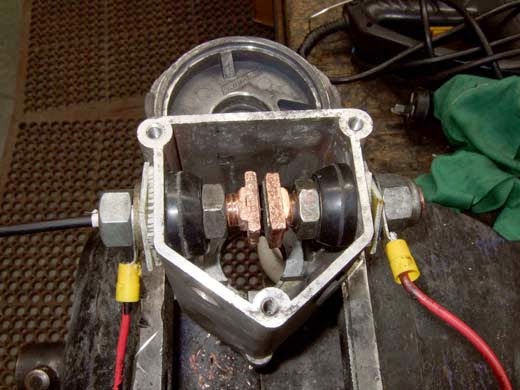 This is how it was all wired up. 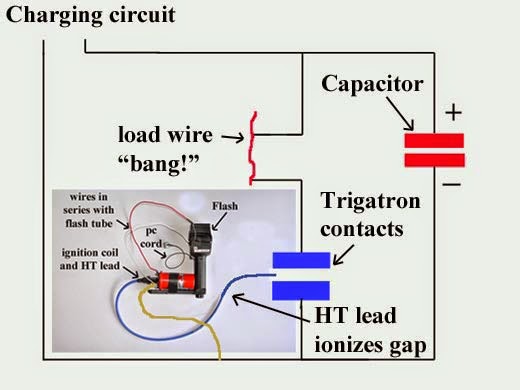 As per the photograph with the sparking-coil and the solenoid contacts, once the capacitor was charged up with 325 volts from the old flash head all that had to be done was to take a photograph with the spark-generating coil connected to the camera. When the flash fired (away from the picture) a spark was generated that jumped the (small) gap thereby ionizing the air and allowing the capacitor to dump its charge across a 7.5 amp fuse, blowing it to bits. The disadvantage of a CCD sensor can be seen by the flare pattern created by the huge flash of light. The advantage is that this picture could actually be taken at 1/1000th of a second with this sensor. 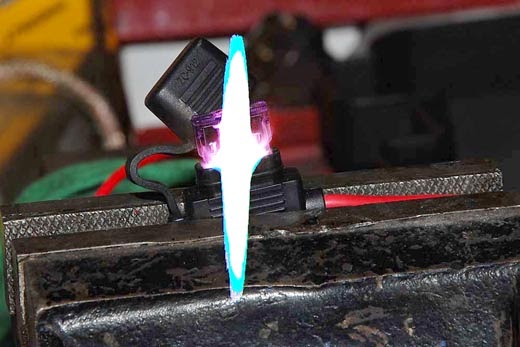 A few seconds later we heard a “plop” in the office as our secretary finally lost her grip on the ceiling fan. It was like a gunshot going off. I will guess at some figures because there’s little chance of measuring the energy released in that small explosion. A 7.5 amp fuse normally takes about 15 amps to blow. I have no idea how this equates to a 325 volt supply because it may behave differently but even at 10 amps that would be 3250 watts, or 3 kilowatts, of energy in less than 1/1000th of a second.
This system proved somewhat unreliable because the next attempt was a misfire and the trigger electrode needed adjusting. It blew a 10 amp and a 30 amp fuse as well. The 30 amp fuse would have been close to 20 000 watts of energy. The fuse on the left is 10 amps and on the right is 30 amps. They looked a lot worse than the average fuse that has blown on a 24 volt truck circuit. 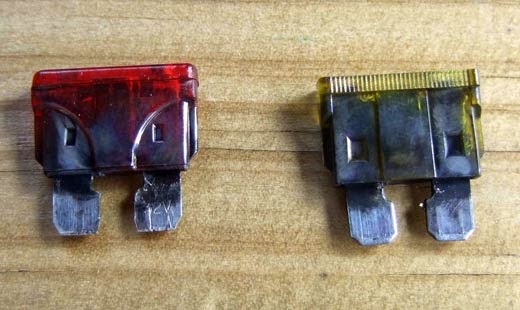 When we inserted a 40 amp fuse there was a really loud noise and the tip of the electrode was melted off in a fraction of a second. I definitely need to make some progress with this project. The Trigatron and I have some interesting photography to produce yet.
We have a metal recycler down the road from our workshop and they had a nice thick 25mm (1 inch) thick brass rod that will provide me with a powerful electrode. Once I get around to drilling the correct size hole and making a framework that can (safely) hold the electrodes the right distance from each other we will be back in business but the noise will be pretty loud. I’ve found that in situations like this wearing a high-visibility vest goes a long way because people don’t bother questioning you then. I once took some photos next to a river at a major park. I wrapped a sword in rags dipped in torch-fuel and set it alight while my model in a Samurai outfit held it out at arms length. We needed to be close to the river in case she caught alight if you can see the logic in that. I wore a high-visibility vest which immediately makes people think you are officially allowed to be there and they don't bother you.
I can just imagine it now, these 8 capacitors all wired up in parallel joined to the Trigatron. I wonder what thickness wire will be destroyed and how much noise it will make before the helicopters start circling (again). 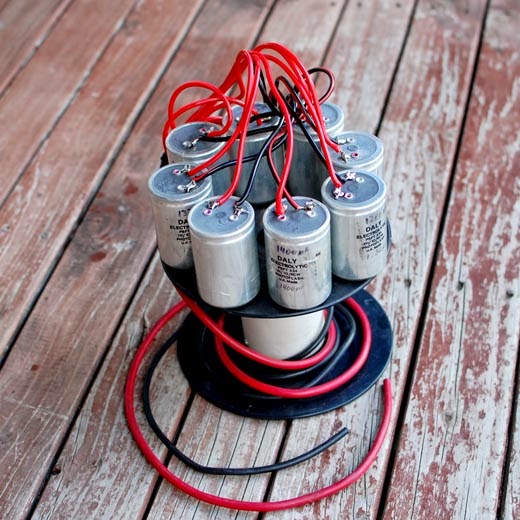 I still believe that besides the pure fun of photographing an explosive event there is perhaps a scientific use for this aspect of superspeed photography. Perhaps by my next book I will have discovered it; then again perhaps I will only have discovered another way to get the attention of the armed-offenders squad, who knows?
Anyway that’s as much as I have to share for now because, as mentioned, there is still a lot of “un-chartered territory” in this area of photography and my latest purchase just arrived and needs my attention.
How will I approach this project, the SCR and wire/gunpowder, the spark-generating-coil and Calcium Carbide, some other invention? We’ll see ;). 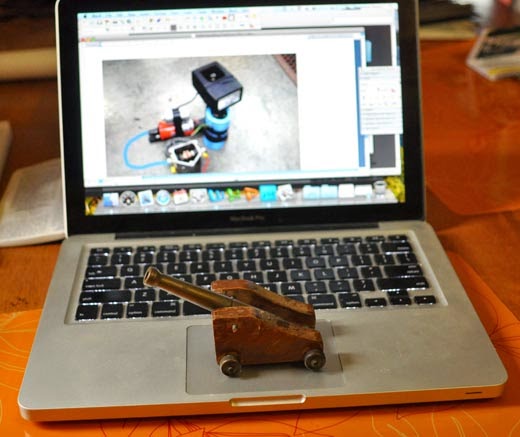 Posted by Desmond Downs at 4:47 PM