The Sunny 16 rule
Basically this rule states that on the brightest, clearest, sunniest day you could possibly get, if your ISO and shutter speed are equal your aperture will need to be at F16 to get the correct exposure. That is, if the subject is in the sunlight of course. Believe me I had to mention that last part because I’ve learned that very little is ‘obvious’ when someone is learning something new.
How or why does this work? First of all we have to establish a standard to base our measurements on and an easy way to do this is to make our ISO and shutter speed the same because no matter what their value, as long as they are the both the same, the exposure will be the same at any given aperture. Let’s assume the brightest day possible and you are at F16. If your ISO is 100 and your shutter speed is 1/100th sec you will get the same exposure at that aperture at ISO 200 and 1/200th sec, ISO 400 and 1/400th sec, ISO 8000 and 1/8000th sec and so on.
Think about it for a while so it becomes clear in your mind. At ISO 100 and 1/100th at F16 you have correct exposure on a ‘sunny 16’ day. If you stay at F16 and change your shutter speed to 1/200th sec you are halving the amount of time you allow the light into the camera. But by changing your ISO to 200 you are doubling the exposure you had at ISO 100. 2 X 1/2 = 1, which is the same exposure. And the same with any other combination that is different to ISO 100 and 1/100th sec, as long as the two numbers are the same they will give the same exposure with any combination because any number you multiply the shutter speed by divides the exposure but if you multiply the ISO by that same number it multiplies the exposure by the same factor, giving the same result. So why did I use F11 in my example image when we are discussing the sunny 16 rule? Because I want this number to stick in your mind, since you will very rarely see an F16 day! Depending where you live of course, but just because there is sunlight between the clouds that does not make it a sunny 16 day. Even if there is not a cloud in the sky, if you can see a little haze on the horizon it will most likely be an F11 day because that haze is also above you and is obstructing the sunlight above you as well.
Try this: Set your camera to manual mode and turn off auto ISO. Choose an equal shutter speed and ISO, let’s say ISO 200 and 1/200th sec. Point your camera at the blue sky or green grass, or just move it around in random directions and see what aperture the camera chooses. [Don’t point it at the sun!]. Most of the time if the sun is shining you will see apertures around F11, very rarely will you see F16.
So what? Why does it even matter if the camera is going to choose the right settings for you anyway? Even though the sunny 16 rule was developed a long time ago and used a lot for manual shooting that does not mean it no longer has any use! It serves as a pivotal calculation point.
For example imagine you want to use flash for an outdoor event tomorrow but don’t know what the effective range will be for the flash. Now you have a pivotal value to use to calculate the worst-case scenario for the day. In bright sunlight you need powerful flash because you are competing with the sun and have to use smaller apertures to block out the sun’s light, which also blocks out the flash’s light. So the worst-case scenario, if we are at ISO 200 and the camera’s maximum flash sync speed [1/200th in this case], is the brightest possible day at F16. So you set up your camera and flash the night before and manually dial in ISO200 1/200th and F16, and with the flash attached you see what settings it tells you that you will have. The flash is telling us, before we even venture outdoors, that with a 24mm lens we will be able to work at up to 2.7m at these settings, for full power flash! Cool eh? [My wife is Canadian eh!]

Then we change to a more realistic setting of ISO 200, 1/200th and F11, which is the brightest day we are most likely to get, and the camera now tells us we will have a safe working distance of 3.8m. F11 lets in twice as much light as F16, which benefits our flash power. [Mathematically speaking, due to the inverse square law, discussed later, twice the power gives us 1.4X the working distance because that will spread the flash over twice the area. 1.4 X 2.7m = 3.8m]. 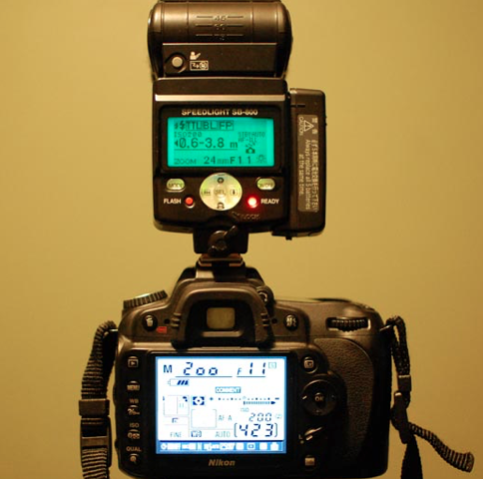 And then we set it to an optimistic ISO 200, 1/200th and F7.1 just to see what we might have to work with if it’s fairly cloudy. 6m is what we get and though it’s unlikely that we will be at F7.1 it only took a few seconds to check with the knowledge we now have of the sunny 16 rule! 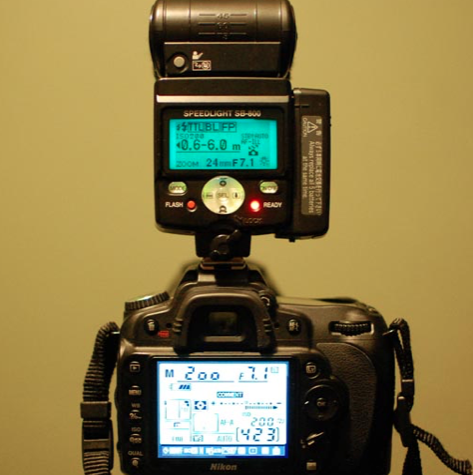 Another application it has besides working out flash distances involves shutter speeds. Suppose it is a sporting event and you haven’t a clue what speeds you could be shooting at. Now F16 is a best case scenario and you optimistically calculate from ISO 200 1/200th and F16. You won’t shoot at F16 so you move to F8 to help your calculations and, knowing that F8 lets in 4X as much light as F16, you now know that at ISO 200 you can shoot at 1/800th sec on a sunny 16 day. Then we go to a more realistic F11 day, which is half as bright [F11 lets in twice as much light as F16, so there would have to be half the maximum light available to have an F11 day], so we know that instead of being able to shoot at 1/800th at F8 we would have to drop to 1/400th on an F11 day [With half the light available]. But of course lenses go wider than F8 so at F5.6, one more stop wider, we could achieve our 1/800th again. It takes a bit of mathematics but it’s good to know it’s not impossible to work out, ahead of the time, what you may have to work with, and even if you can’t do the maths yourself you now know what the pivotal settings are and someone will be able to work it out for you perhaps.

Posted by Desmond Downs at 2:58 PM