Exposing high speed images correctly
High-speed photography involves a fair amount of manual settings if you want to make things easier and more predictable. You have time to play with or you wouldn’t be doing this, right? The different speeds that a flash fires at varies between makes and models but one basic fact is that they fire faster at their lower power settings. It makes sense because when they fire at low power they don’t need to release as much energy as at full power so it is all over within a shorter time.
As an example, the NikonSB800 takes about 1/700th of a second for a full power flash but at 1/128th power it fires as quickly as 1/41600th of a second. The SB24 fires at 1/11000th at its weakest setting which is sufficient for many subjects. The main point to remember is that you will be choosing a power output that gives you the speed you want, and then you will adjust the distance of the flash from the subject based on the inverse square law to get the correct exposure.
Here’s a basic diagram from my other book “Photography Masterclass,” to illustrate the inverse square law. 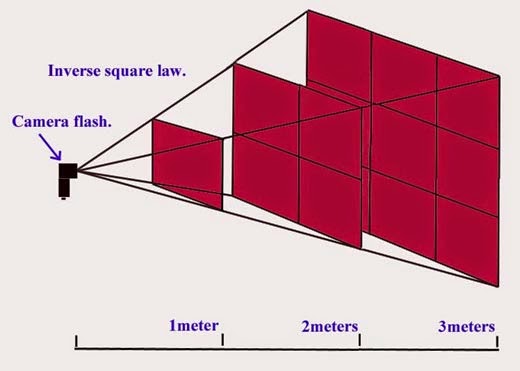 Basically the name of the law explains itself. If something is twice as far away then ½ squared means that the flash is only ¼ as effective, three times as far and we have 1/3 squared or 1/9th as effective. Of course this works in reverse as well. If your exposure looks a little dark, then moving the flash half the distance closer suddenly makes it four times as effective, your main limitations being the quality of light [assuming you want it diffused] and how close you can get without blocking the picture.
For my background I learned to use the horizon if possible, it’s so far away that the flash has no effect on it. I would set up my stand outside with nothing behind it basically, or whatever is in the background far enough away not to be lit by the flash.
To understand the concept of using a slow exposure without seeing any ambient [ambient = any light that isn’t flash] in the exposure we will have a look at a scene at night taken at the settings needed to see the fields in the background. This photo was taken at night! 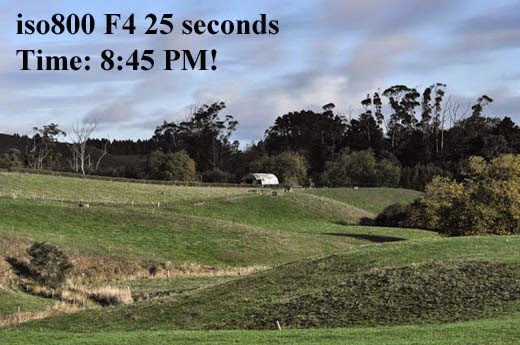 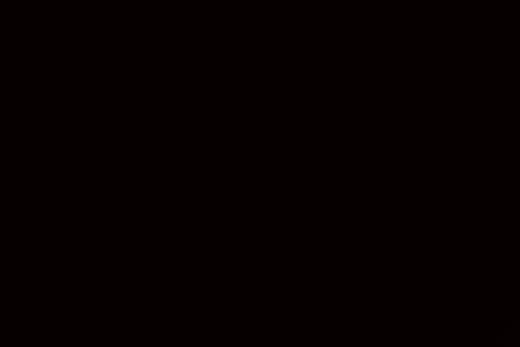 That’s our studio for now, we have our settings we need to use and once we choose a flash power, effectively our speed, to work with, we can adjust our exposure by moving the flash backwards and forwards, that’s what test shots are for before you do anything destructive. You could choose a half second, one second, or even a 5 second exposure to work with, depending how much time you need to cause the event after pressing the shutter release. Any of these settings outside at night will give you a ‘blackground’. The aperture is also fairly flexible so you will be able to experiment a bit. Just make sure you choose a shutter speed that gives you a comfortable time to work with, without being long enough for you to accidentally get a double flash that ruins the picture, or too short to capture the event when it finally happens.