Superspeed Photography
Something that I consider “my invention” because I haven’t heard of it being done before is “superspeed” photography. It is the act of photographing an event that would not have taken place if you had not taken the photograph. It can be faster than high-speed photography in that your camera’s fastest shutter speed can be used rather than using a 1 or 2 second exposure while relying on the flash to freeze the motion. It is also more reliable than using a fast frame rate on your camera because the event happens because you pressed the shutter, not because you were trying to photograph the event.
How does it work? Basically you are using the flash triggering circuit of your camera to make the event happen, so it happens as quickly as the action of your flash firing in many cases, and as reliably as the flash triggering circuit in your camera.
The flash triggering circuit in your camera is basically a switch that joins the centre and side pins of your flash together as you take a picture. In most reasonable cameras this can handle up to 250 volts while some can only handle as little as 6 volts so just check the specifications of your camera before trying any of this. A work-around if you’re not sure is to use an optic trigger and fire your camera’s flash to trigger that so you don’t have to worry about damage to your camera’s electronics.
Most cameras have a focal plane shutter which means that any speed faster than the flash sync speed (usually 1/200th or 1/250th of a second) involves the shutter becoming a slit that slides across the frame to limit the amount of light impacting on the sensor (‘sync’ is basically the synchronization speed of the camera and flash). So at 1/500th of a second instead of the shutter opening and closing in one movement the first ‘curtain’ starts opening and as it gets halfway the second ‘curtain’ starts closing resulting in a slit half the original size sliding across the frame and therefore half the light as at 1/250th affecting the exposure.
Here are a few pictures to make this clearer. An old Canon camera with the back pulled off has a flash sync speed of 1/90th of a second. When it fires you can see the entire frame. 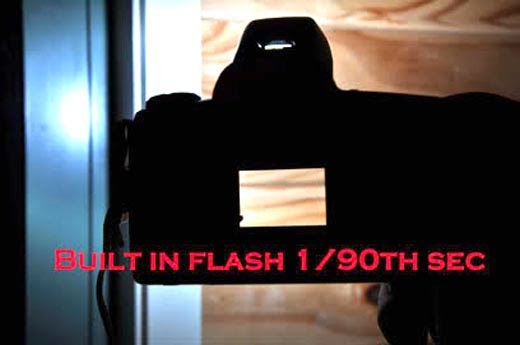 But when we add an external flash and fire that at 1/1000th of a second the focal plane shutter has now become a slit to give less than 1/10th of the light of 1/90th meaning that when the first curtain reaches the bottom, and fires the flash, all that is affected by the flash is a small slit at the bottom of the frame. The flash fires as the ‘first curtain’ reaches the end of its travel. Most people who experience this problem with using a flash at high speeds report a dark part at the bottom of the frame meaning that their camera’s shutter curtains move from the bottom to the top of the frame. 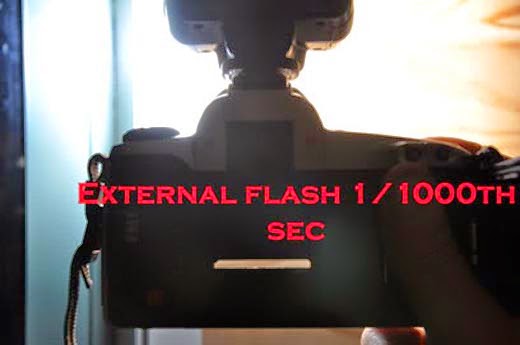 The size of this slit will vary depending on the chosen shutter speed, how much faster it is than the camera’s maximum flash sync speed, and the ratio of those speeds. In other words if a camera can sync flash at 1/250th of a second then at 1/500th the slit will be half the size of the frame, at 1/2500th it will be 1/10th of the frame and so on.
This will be a major factor in any experiments you conduct, how much of the frame will be affected at high speeds, so try to stay within your limits in the beginning. If you have a camera like the D40/50/70 you can use any speed, which will be explained later.
So how does superspeed photography work then? The simplest approach is to modify a flash, which is very dangerous if you don’t know what you are doing, and even if you do! If you open the end of the flash you will find a tube with a wire at each end, and one near the middle. Do not touch these wires with your bare fingers! Always take the batteries out of a flash when working with it. I usually turn it on, fire it at full power and immediately turn it off again to try to dump the energy from the capacitor. Even then it is could still have a charge in it so you still have to be very careful with it. It’s handy to have a 240 volt light bulb with two wires coming off it to connect to those wires and discharge the capacitor. The scary method is to touch both wires with a solid piece of wire and watch the spark blow a piece of the wire off as it discharges.
Even after taking all these precautions it is still best not to touch any bare wires. I simply snip one wire (any one) at the end of the tube and join two longer wires to them to connect to whatever I am putting in series with it.
Here is a diagram to illustrate this concept. 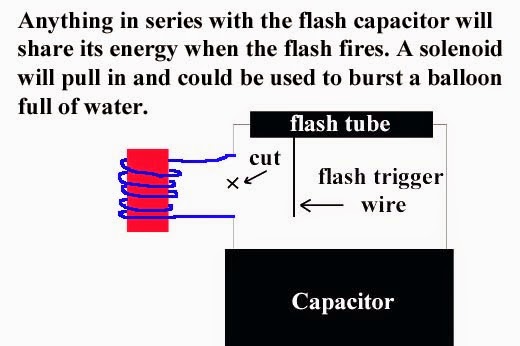 My first attempt at superspeed photography was trying to burst a balloon full of water in daylight. The early exposures didn’t work because of the time it takes for a solenoid to pull in. I used a control solenoid from a diesel fuel pump and put a needle at the end of the plunger. As it pulled in it burst the balloon full of water. Due to the lack of control in the situation, a shaky stand with a balloon full of water and strong winds, I eventually had to drop to 1/30th of a second to give the needle time to reach the balloon. This resulted in something that looked like a double exposure as the original shape of the balloon was captured plus the burst a fraction of a second later. I would call this the first successful image of superspeed photography. 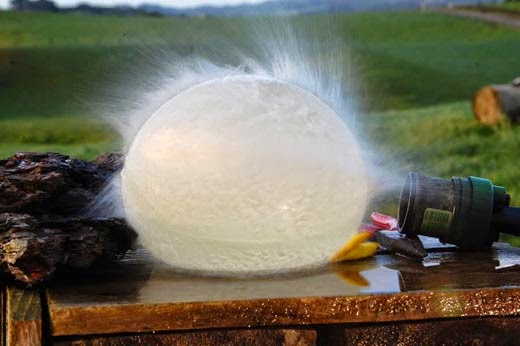 Summary: Superspeed photography involves capturing an event you have created by the act of pressing the shutter and with the right technique can be used at any shutter speed. From here on we will be using this technique for creating

Posted by Desmond Downs at 1:09 AM