The spark generating flash
This is the point where I start mentioning disclaimers. Don’t do anything that I have done here, you could seriously injure yourself (if you actually survive). Capacitors store a lot of energy at high voltages that can kill you! These illustrations are for the interest of those who are fully capable of working with high/dangerous voltages and should not be copied by anyone.
When a flash is turned on and the capacitor is charged up the voltage from the capacitor is always making contact with the flash tube and the wires are always live, even after the flash has been turned off the capacitor holds a charge for a dangerously long time. There is a trigger wire just off-centre of the flash tube that ionizes the gas in the tube to fire the flash at different powers, depending on the time of the trigger voltage.
I will repeat this for emphasis: The capacitor is permanently connected to the flash tube and the wires at either end are always live even when the flash is not firing and for a a long time after it is turned off!
Now let’s have a look at a flash that has been modified to generate a spark when it fires. 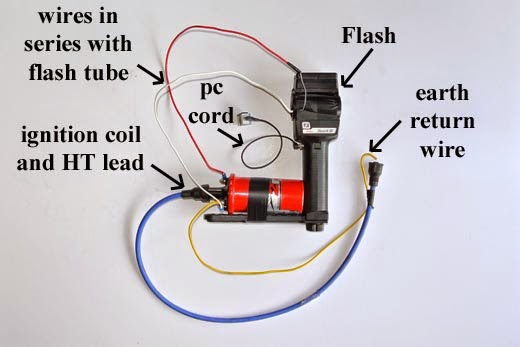 The basic principle involved here is that if an ignition coil is wired in series with the flash capacitor it will share some of the energy of the capacitor discharging through the flash tube. I’m not sure how much of that energy; all I know is that with most of the reasonably powerful flashes I get a spark equivalent to about 30 000volts. With one design I added a second capacitor in parallel with the main flash capacitor, which is similar to jump-starting a car with another battery.  This gave me a spark that jumped a gap that was probably equivalent to about 50 000volts. Who knows, it’s impossible to actually measure that voltage so it is merely assumed based on a table of distances and gasses etc. In the image below it is jumping a small gap, it jumps a 5cm (2 inch) gap when required. 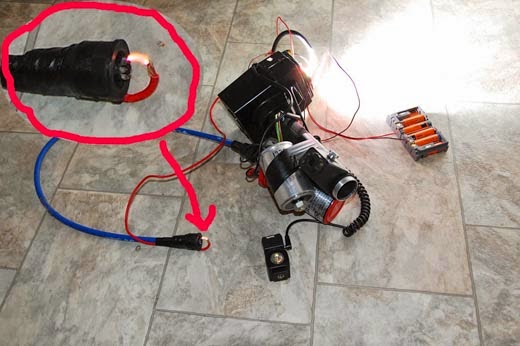 And when you consider the fact that the flash is firing pretty brightly as well it shows how much more power could be available for a spark if we didn’t have to share it with the flash tube.
Now for the wiring diagram, to show you what you shouldn’t attempt. If a flash head is opened, the old hammerhead style flashes are easier to get apart; you will find a tube with a wire at either end. These two wires are connected to the capacitor, which usually has around 300volts available - which is enough to blow off your fingertips while frying your heart. Starting to get the picture? Now if one of those wires is cut (either one) and two extension wires are connected up to be joined to either end of an ignition coil, the flash will still fire but some of its energy will be used up, in the coil to generate a spark, while the rest is released as light energy. The HT (high-tension) lead of the coil will need an earth wire and the side that it needs to be connected to will depend on which side of the flash tube you cut into and which way around the coil is connected. Play around with both options and see which gives the best spark. 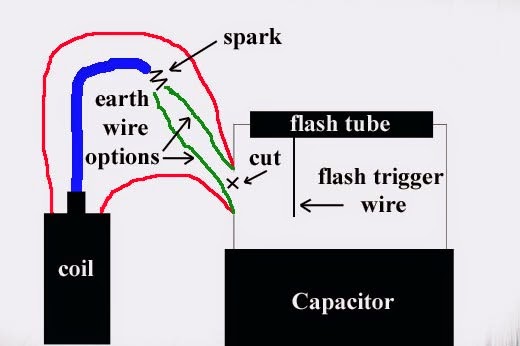 There are obviously technical ways of working out which way around to connect the wires on the coil and which side of the coil to connect the earth lead to but generally it is much simpler to just try different variations and see which works best. Of course you could spend hours learning about the actual theory of it all and get it right by logically working out which way around it should be connected but there is always the possibility that the coil you decide to use isn’t wired up the way the text books suggest it should be. To me it’s just not worth the bother, decide what you want to do, connect things up, and see what works best – it’s worked pretty well for me so far!
So what is the purpose of this exercise then? Well for one thing you now have a tool that generates a 30 000 volt spark (approximate of course) each time you take a photo.
You could put the HT lead next to some water and put the earth lead inside the water. 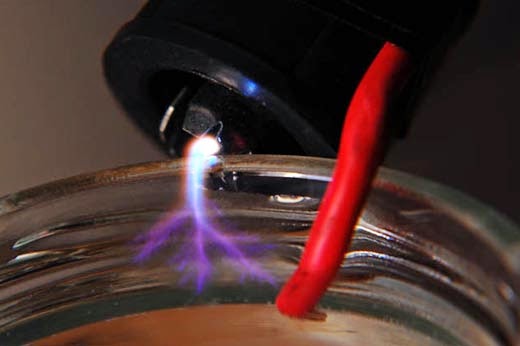 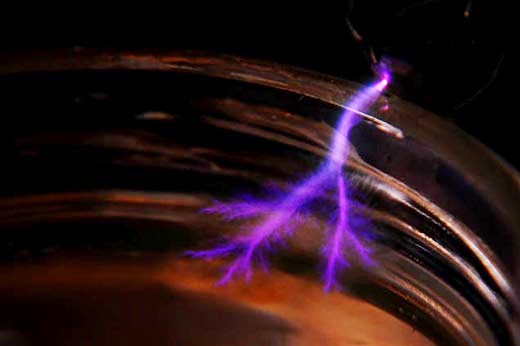 If you are using a normal camera with a focal plane shutter you will be limited to the flash sync speed of your camera, usually around 1/200th of a second. I’m not going to go too much into the focal plane shutter, I did that in my first book “Photography Masterclass”, but I will make mention of a rather ‘special’ camera that is good for this type of thing.
In fact there are several models to choose from that have a CCD sensor. The Nikon D70/S, D40, D50 are the main ones I can think of. They are special in that they can sync flash at 1/500th of a second and faster if you trick them. They do not use a focal plane shutter that simply varies the size of the slit for speeds above 1/250th. Instead the whole sensor switches on and off to capture the exposure. This means that when the flash fires the entire sensor is exposed to the light every time, even at maximum shutter speed. They have disadvantages like sensor bloom (bright patches) when shooting into bright lights so they don’t make them like this any more ☹. I love these cameras and do a lot of my work with the D40. If you use a hotshoe adapter and pc cord the camera doesn’t know there is a flash connected so it doesn’t limit your shutter speed to 1/500th when you’re doing ‘different’ photography.
As an example of what I am talking about I’ll show a range of images of a spark taken at various speeds with the D40 and the spark-generating-flash system. This is what I call “superspeed” photography, the act of photographing an event that you have triggered by pressing the shutter release. Any camera can do this speed. 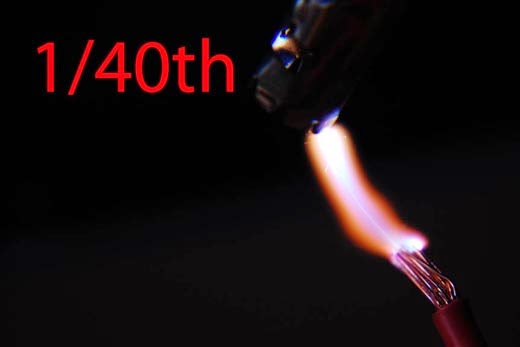 Only a camera with 1/500th sync speed can do this. Try it with a camera with a focal plane shutter and you will perhaps see half a spark as the slit of the shutter blocks half the screen. You could frame the image with the spark in the top half and capture it though, just the bottom half will be blacked out. 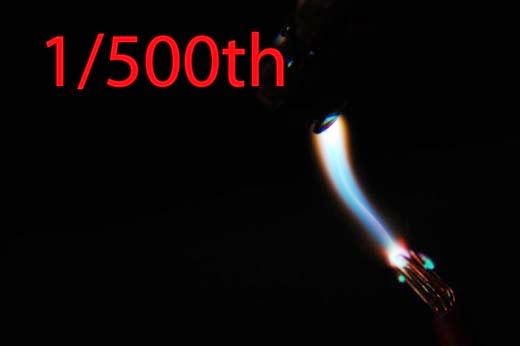 Now we go to higher speeds. 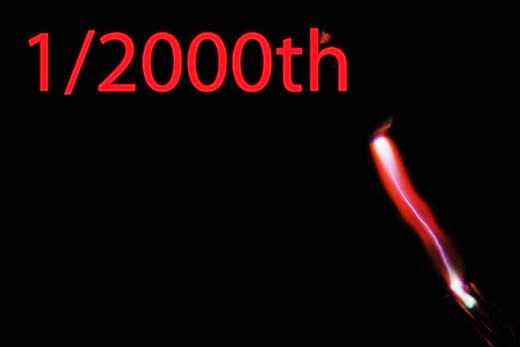 And the fastest shutter speed the D40 can do. 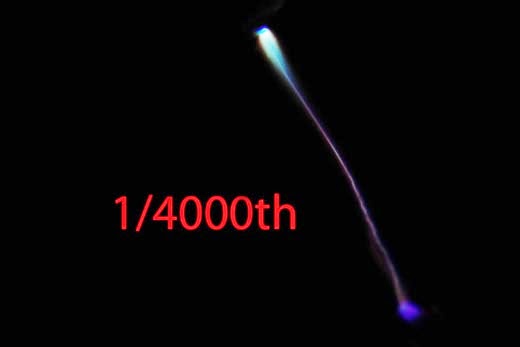 The way I see it this set-up can be used as a scientific tool. Photographing an event at a set speed that you know is generated when you press the shutter. I think it has a lot of potential.
Once I got this working I thought I had it made. Now I could start photographing gas explosions! What a disappointment though, it’s not easy making a gas explosion no matter how much the fuel stations get our hopes up. The air-fuel ration has to be pretty good or nothing happens. I had a bag full of petrol with a 30 000 volt spark jumping from above the liquid’s surface right down to the earth wire under the surface and still nothing happened. The mixture was too rich, not enough oxygen. Eventually I got a lame burst of flames from a reasonable mixture of air and gas but nothing to write home about. 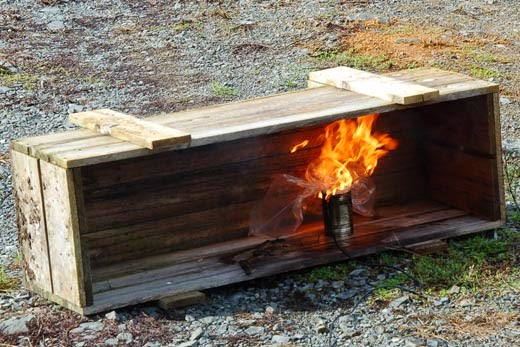 I’ll just emphasize what people say about my photography at this point. The pictures aren’t very artistic but what’s the point of setting up fancy backgrounds before you even know if something will work? I know they are right, I look through my images and they all look pretty ‘mechanical’ but wait till I get the technique right before hurling any more accusations, once I have perfected my methods I start getting artistic, it’s just that I’m still working towards perfecting them but sharing what I have learned so far in the meantime.
My next idea was to buy some gunpowder, I had never worked with the stuff before and in hindsight perhaps the container shouldn’t have been so close to my experiment area. Why do people keep giving me fire extinguishers??? 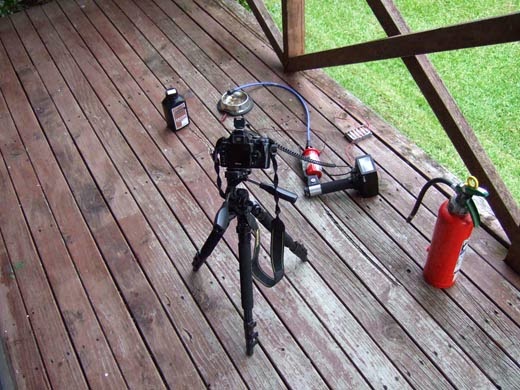 The experiment was a failure; a spark does not ignite gunpowder. Electricity simply looks for the easiest path to the earth connection, which involves pushing the granules of gunpowder out of the way to get there. 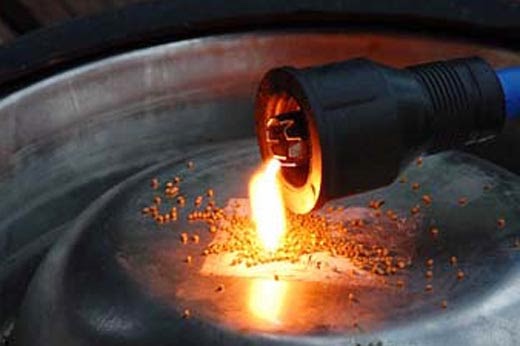 Occasionally I saw a glimmer of hope but knew this wasn’t reliable enough to start getting artistic. 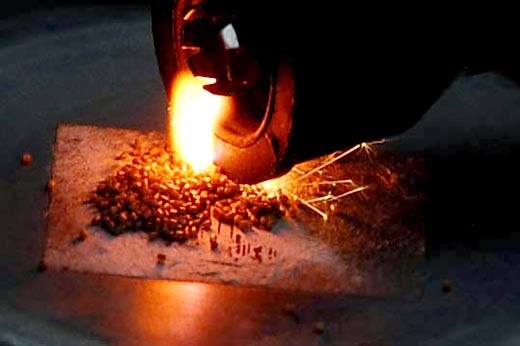 The next step was to use something that would slowly produce some gas in an existing oxygen rich environment. It’s a good thing my microwave volunteered for the job by not working a few days later when I wanted to use it. I had no hesitation in buying a replacement rather than trying to have it repaired, I had plans for it. 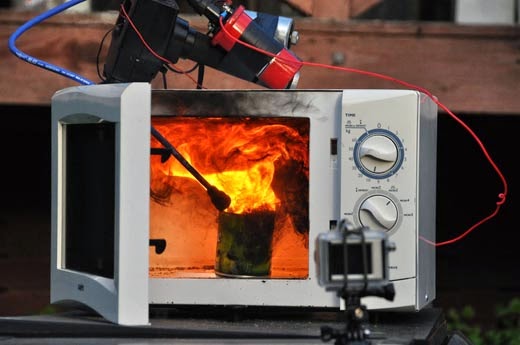 That was the best image I got from my D90 at 5fps but if you look up “fireball two” on YouTube you can watch a video taken at 400fps with the Nikon J1, another useful high-speed tool. This exercise involved throwing a teaspoon of Calcium Carbide in a can of water, which results in the release of Acetylene gas. The spark-generating-flash ignited the mixture as I took the first photo with the D90. I’m not after a loud noisy destructive explosion, just a nice fireball.  I made some low quality screen captures of the video, which shows a few stages of the fireball.
First the flash fires and generates a spark igniting the mixture. 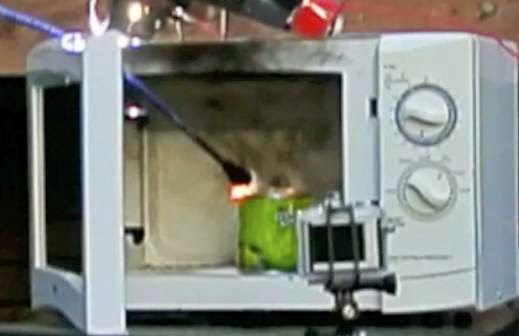 The flame front starts to spread. 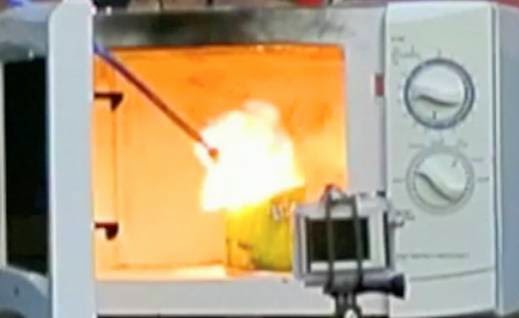 Eventually the fireball reaches out of the microwave oven. 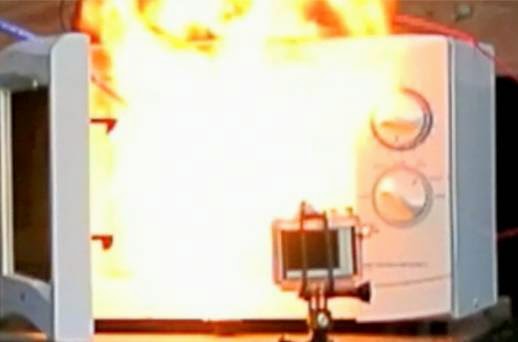 The spark-generating-flash system provided me with some interesting images and may prove useful with exact air-gas mixtures but I needed something more reliable if I wanted to photograph a decent explosion. This led me to do some research and learn about the Silicon Controlled Rectifier (SCR).

Posted by Desmond Downs at 1:23 AM